We all love to gamble every now and again. While we win and lose almost in equal measure, playing is where the real fun is, rather than in winning. Ever wondered what casino games are the most popular? We've put together a rundown of six of the most popular casino games out there so you know what to try out at your favorite casino.

Slots are very popular machines that play loads of different games, with the house edge ranging from 2% to 10%. In general, you'll insert coins into a slot machine and either press a button or pull a handle. This spins the wheels. Older slot machines came with three wheels, while newer machines often have three to five simulated wheels. Once the wheels stop, you get paid according to your pattern of symbols.

Roulette is an exciting game of chance where players predict where the ball is going to land on a spinning wheel. The game first originated in Paris, France, way back in the 1800s, but it quickly gained so much popularity around the world. There are many reasons for Roulette's popularity, one of which is that it's very simple to play. Essentially, picking numbers on which you believe the ball will drop is all you need to do. If the ball drops on any of the numbers, you win.

This card game is based on a 5-card hand. The hands are ranked from the lowest to the highest. You win if you have the best hands. There are numerous versions of poker, including 5-card stud, 7-card stud, 5-card draw, Omaha Hold' em, Texas Hold' em, Pineapple, and Razz. Today, technological advancements have led to the creation of mobile versions, making Poker even more fun for most players.

This is a game where players attempt to match their card numbers to randomly picked numbers. The card has a 5x5 matrix in which the letters B-I-N-G-O represent each column. The center square is usually a free square. If you're the first to form a given pattern (typically a straight line), you call out "Bingo". Your card is checked for accuracy before the winner is declared. Then you start a new round.

This popular casino card game is played between the player and the house--also called the dealer. The dealer hands out a couple of cards to every player and retains two cards. The house has one card with the face up and the other down. Each player has an opportunity to get as close as possible to 21.

Blackjack can be played within seconds, meaning that you can play lots of hands within a very short period of time. Basically, Blackjack gives you the chance to play something really short you can get into and out of whenever you've got a few spare minutes. With the right skill and strategy, the house edge can be as low as 0.5% 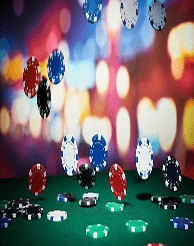 Originating in the U.S. and now becoming more and more popular around Europe, Craps is one unique dice game in which players themselves roll the dice, deciding who wins the game and who loses in two stages. About 20 players can play in one game, with each getting a round of rolling the dice. Players can also make bets on the dice thrower. Several kinds of wagers can be placed on the table game. The casino team comprises two dealers, a Stickman, and a Boxman. With optimal strategy, the house edge of Craps can be as little as 1.4%.